"...An accomplished, sensitive composer and a natural leader who brings the best out of those around him" - All About Jazz 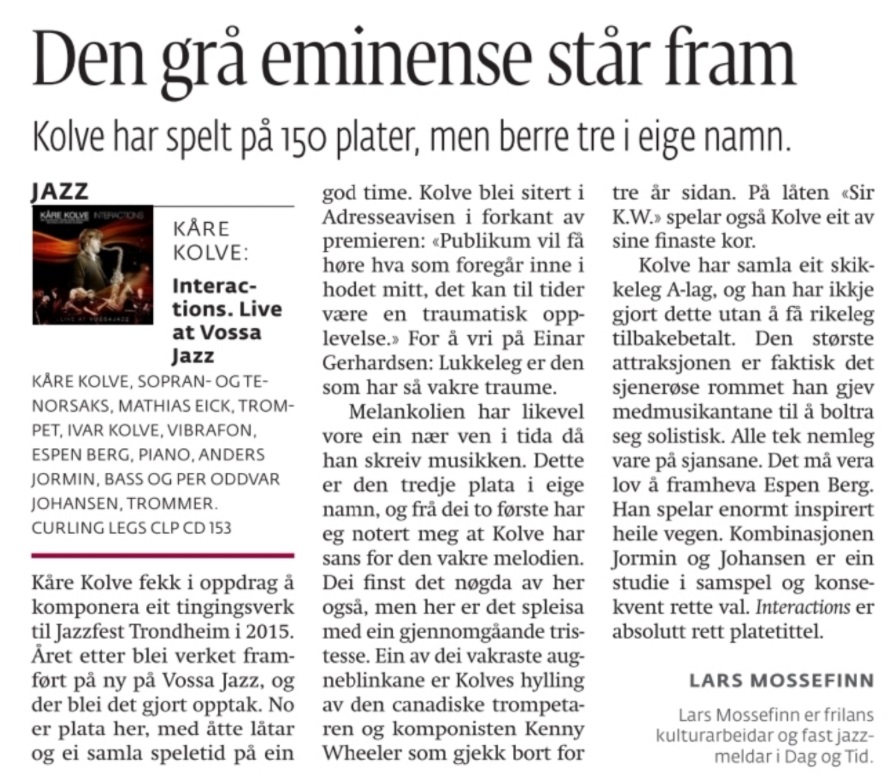 Kåre Kolve is a Norwegian saxophone player and jazz musician. He was born in 1964 in Voss, on the west coast of Norway. He started playing the saxophone at the age of nine, when he was joining the local marching band i Voss. After finishing high school he moved to Hamar to study music at Toneheim Folkehøgskole. A year after, in 1984, he got accepted at Trondheim Music Conservatory. In Trondheim he studied jazz and pedagogics for three years. After his education he started working for Rikskonsertene, travelling around the country performing concerts at local schools for kids and youths. In 1990 he released his first jazz album «Going» with the band First Set. In the early nineteen nineties he toured all around the world with big artist and bands such as Randy Crawford, Lava, Mezzoforte, Sissel Kyrkjebø, Ole Edvard Antonsen, Trine Rein and now recently Dance with a Stranger and Åge Aleksandersen. Kolve has also been a musician in many musical theater plays at Trøndelag Teater, such as Hair, Jesus Christ Superstar, Les Miserables, Cabaret and Chicago to name a few. As a session musician he has played in bands for big TV shows in Norway, such as Melodi Grand Prix, «Amandaprisen», «Kjempesjansen», «Idrettsgallaen» and «Ja vi elsker». In 1996 he founded the salsa band Mambo Compañeros with friend and musician Morten Huuse. Kolve has composed and released three albums with the band, who is still playing and producing music. In 2008 he released his first solo album, «My Direction», with his own quartet. Two years later Kåre Kolve Quartet released their second album, called «Further Direction». Now Kolve is ready with his third solo album, «Interaction», which is a live recording from his performance at Vossa Jazz. In 2008 Kolve graduated from NTNU University with a masters degree in performing jazz. He is now also a part-time teatcher in the very same institute he graduated from, teatching jazz history and saxophone.

Kåre Kolve has participated on more than 100 records. Below is a selection of these.

As a regular member of the band

The Very Best of LAVA


Featured on records for musicians such as